My Yellow hibiscus is a Survivor.

I bought her a couple of months back from one of the nurseries at Kovan. It's actually my favourite nursery there because the lady owner is so sweet and nice.

And she has been INFESTED with pests ever since I brought her home. Maybe it is her colour. I really don't know. But white flies, anphids and even for a while, red spider mites love her.

It's quite disgusting even to think about the number of pests I see on her once.. URGHH!

But strangely, this hibiscus kept on blooming and blooming, in spite of all the pests.

Now, I set out gardening trying to be green.. By that I mean I try to recycle and not use chemical pesticides.. But on my yellow hibiscus, I finally succumbed to using chemical pesticide. No amount of my organic sprays and "leaf-wiping" seemed to get rid of those pests.. And really, I get the creeps looking at her sometimes. So, I finally gave up and bought a bottle of Anti-scales.

A few weeks later, the colony of pests were gone. I cut off all her flowers and buds so that I didn't have the clean off the "corpses" of the anphids.

She's now healthy again (although I think she can be healthier if I change her pot) and today, I took a few pictures of her.

I love her bright yellow flowers and her deep red centre... and of course, the fact that she never seem to stop blooming! 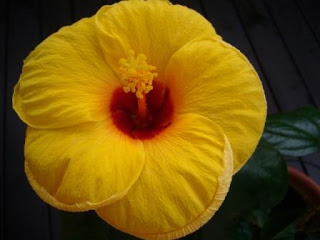 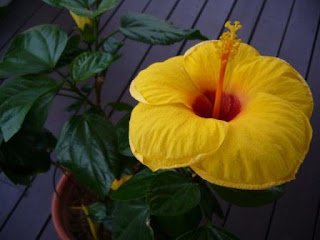 My mother-in-law often ask whether I have been boiling soups.. I invariably end up replying.. "uh.. not so lately".. Well, that's not a good reply.. whatever excuses I give.. since my husband and I actually love soups. I really ought to boil them more often.

Some people place a great importance on well-boiled soups for their high nutritional value. Actually, I'm not quite sure about that. Sometimes I wonder if all the nutrition gets killed in the 2 - 3 hours of boiling.

But I love to drink them anyway, so never mind about the nutrition part.

For me, soups have always been rather easy. The hard part is not cooking it but getting the ingredients for it, especially the Chinese herbs.

I typically just do a few things for most of my "well-boiled" soups.

1) Always blanch the meat first before using - so the soup will stay clear and you won't get those brownish/ greyish things (I think is from the blood...?)

3) Never add too little meat or bones. I did this a few times when I was newly married. I don't quite like meat you see, so I thought oh well, just add enough for 1 person. I invariably ended up getting a strange look and comments like "Is water?"

4) Add salt last. I don't know if it is bad to do so upfront, but I know that the water will reduce after 2 hours, so adding salt last means at least it won't get more salty as you boil it. Just don't forget it (like I do 20% of the time).

I added 1 Old cucumber, a some pork ribs and pork loins, a small handful of red dates and a few dried scallops. Some people use dried octopus instead of scallops and add carrots to make the soup more colourful. But I don't have those today so.. just the basic Old Cucumber Soup for my family tonight. 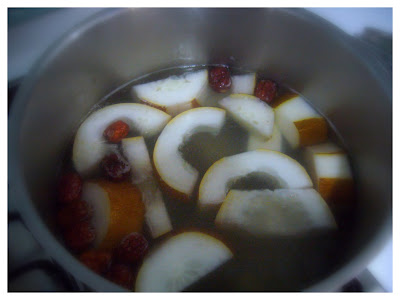 Email ThisBlogThis!Share to TwitterShare to FacebookShare to Pinterest
Labels: cooking

Making a neat cup of cappuccino

The Bialetti's Mukka Express is one cool coffee pot.

I bought it as anniversary gift for my husband, seeing that he likes a cup of coffee every now and then at home... but I'm the one enjoying it more now since I'm the one making the coffee.

It's pretty easy to operate - put some grounded expresso roast into the coffee holder, use the measuring cup to pour some water into the (black) container below, use the same measuring cup to pour some milk into the (white and black) pot area, press the knob for cappuccino and put it on the fire for about 6-7 minutes and viola, a nice, professional looking cup of cappuccino is done! 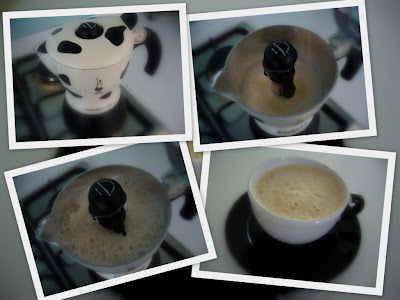 The only drawback? I struggle to take apart the black container below from the white-and-black pot for washing. Somehow, some pressure is being built up and it requires quite a bit of strength to take it apart.
Posted by Open Kitchen Concept at 3:55 PM No comments:

Email ThisBlogThis!Share to TwitterShare to FacebookShare to Pinterest
Labels: drinks

Lost and still not found

Recently, I have been losing stuff.

Now that's very strange because these things must have just walked out of the door by themselves.

First, it was a notebook where I write my bits and pieces of notes and my daily plans. And then my kitchen scissors. Then my gardening scissors..

Then, very strangely, a pair of pants I bought in HK. I can't find them in my house when I came back home.. and after calling HK, it is not at the house in HK either.

And yesterday, I couldn't find my pencil case and caseful of beautiful pencils and pens.

There is no one to blame but myself really.

I could have thrown my scissors away.. left my shopping in the mall.. A thousand possibilities though I do not and will probably never really know the real reasons.

I have always been quite absent-minded.

Once, when I was in school, I left my wallet on the bus and got down without it. A kind boy from a neighbouring school picked it up and called my home. I met him the next day to get it from him and gave him a box of chocolates in return for his kindness. That very day, I left it on the bus once more and never saw that wallet again. It really was quite funny.. though not to my mum at that time.

I always thought that I'd grow out of this absent-mindedness.

Apparently not.
Posted by Open Kitchen Concept at 12:05 PM No comments:

Email ThisBlogThis!Share to TwitterShare to FacebookShare to Pinterest
Labels: misc

Occasionally, I have a strong craving for Japanese curry.

To my Southeast Asian taste bud, Japanese curry is a bit strange - strong smelling, somewhat sweet and a little spicy.

But nevertheless, I like it and will actually crave for it every so often.

I always lament that there isn't any good Japanese curry-san in Singapore, not since this tiny shop in International Plaza closed down a few years back, anyway.

So, I wasn't really keen to try out Mr Curry the few times we walked by the shop at The Central.

But I met a friend for lunch at The Central on Thursday and thought I'd give it a try anyway.

Oh.. I was quite pleasantly surprised. To be honest, I think I like the shop decor, the takeaway boxes, how they serve the food and all better than the curry. But the curry wasn't too bad at all. It had a very... "Japanese" taste and was still spicy nonetheless. It wasn't thick enough for me.. I thought it was quite runny but I still polished up every bit of it. It was a satisfying lunch. 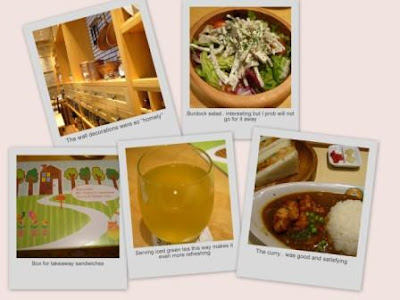 Posted by Open Kitchen Concept at 12:35 PM No comments:

Email ThisBlogThis!Share to TwitterShare to FacebookShare to Pinterest
Labels: restaurants

My geberas (*fingers-crossed*) have so far been spared from my latest and worst pest-attack ever.

I think it is due to the fact that it sits in a different corner of my balcony, away from the rest of my plants.

I finally managed to figure out how to upload my pictures to my laptop and here is a picture of it.

I'm really proud of my Geberas actually... They smile at me all the time and are my greatest encouragement to not give up on gardening in-spite of my black fingers.. 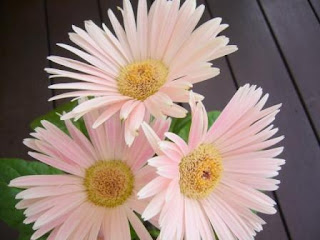 Posted by Open Kitchen Concept at 11:30 AM 2 comments:

Once upon a time, I bought a packet of parsley seeds..

I sowed some seeds in a plastic cup. Everyday, I sprinkled some water on the cup.

After 3 weeks, only 1 seed seemed to have germinated. I transferred that one seed into a small pot.

When I went away for a short trip, I put it into a zip-lock bag, protecting it from the rains and winds..

The plant looked fine when I returned.

Today, I took another look at my plant.

Oh.. it really doesn't look like parsley... I put it beside the African violets I have been propagating..

Goodness me, they look a little similar!

Hence, I suspect... I don't have a parsley after all.

But as to how my parsley turned into an African violet.. I really have no idea..

In the 2 pots below, the one on the right is supposedly my parsley. The one on the left is my African violet... 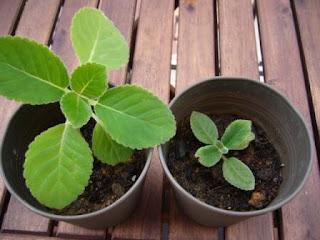 Posted by Open Kitchen Concept at 8:20 PM No comments:

I have found 2 good solutions for my plants whenever I travel..

The first solution - MUM. Yup. I gave my keys to my mum, who promised she'd drop by occasionally to water them.. and of course, she did. And she tidied up my garden too.. Thank God for mothers and especially for mine...! :)

The second solution - Zip-lock bags. These ones I weren't so sure about.

But, after my recent losses to soil mealies and red spider mites, I have no more edibles in my garden, apart from my mint collection, a lonely parsley and 2 purple chilli (who have survived most amazingly... I was going to throw them away when I spotted new baby leaves).

Most of them are currently planted in small pots, so before I went away, I gave them a good watering, put them into a few ziplock bags and told my mum to skip the watering for these plants. I did the same to the african violets I was propagating.

And oh... when I came back, my plants were growing well and comfortably inside the zip-lock bags. It was like a little greenhouse for them, keeping them in a humid environment and protecting them from the strong winds and heavy rains.
Posted by Open Kitchen Concept at 7:25 PM No comments: