A part of the MRT (Singapore subway) broke down the other day during peak hours, just when people were planning to head home from work. Some people were trapped in a dark train for about an hour. Others like me had to take a detour to get home.

Naturally, many people were frustrated, angry even with the company responsible - SMRT. Many people in Singapore rely heavily on the subway system to commute.

Taxis aren't particularly cheap as well, especially with the bewildering system of surcharges.

So, it's quite natural that people are upset when the MRT system breaks down.

I hold a different view however.

I think the MRT is actually the best public transport option we have. I think that our bus system is sadly and embarrassingly deficient for a small country like Singapore.

The Singapore bus system is made up of 2 main types of buses. Buses that bring you to the nearest MRT station, and buses that take the longest detour to get you to your destination.

The recent case of the bus driver who got lost proves how complex and roundabout our bus routes are.

There is a bus from where I live that I can take to work. It stops right outside the building where I work. However, from where I get on, it'd take 31 stops to reach my office.

There is another bus I could take, if I choose to hike a little further up the road from where I live. Again, this bus takes 29 stops to drop me right outside my office. Estimated travel time based on 2 - 3 minutes per stop, ranges anywhere between 58 to 87 minutes.

So rather than focusing on focusing on the subway breakdown incident, I think we should really get the bus companies to explain why are bus routes in a small country like Singapore, so badly designed that we only have the MRT as our option to get to work, in a reasonable amount of time!

Sadly, the companies that own subway lines also own bus routes.. so for now, I just can't see what incentive they have to redirect us away from heavily relying on their more profitable channel of transportation. 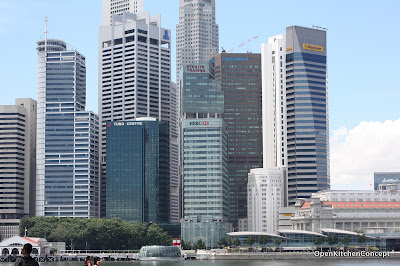 I work downtown and I have problems finding many options to travel to work.
It would be so much more difficult if I work in a business or industrial park in the suburbs..
Posted by Open Kitchen Concept at 9:30 PM

Email ThisBlogThis!Share to TwitterShare to FacebookShare to Pinterest
Labels: musings