We moved out of our home for the last almost 6 years on 13 Aug.

It was the first house that Little N remembers moving out from because although she was born in another house, we moved before she turned two and she only has vague memories of that place.

She was very reluctant to move.

“When I grow up, I will move back into this house.”

We had sold our place even before we bought our new house. Our original thought process was, it’d take a long time for us to sell, and maybe even longer to look. So we put our house up for sale and planned to move to an interim place for maybe about a year whilst we hunt for a new house. But as it turns out, our house was sold pretty quickly. And then we started our house hunt and found a new place pretty quickly too.

So that meant our interim stay would be just a 3 month transit... and we’d move house twice in 2019.

After we moved, Little N missed the old house and asked to visit the place. So we decided to visit during her September school holidays.

Until we reached the place, she did not understand that she would not get to go into the house anymore. But she was contented to visit and play at the nearby park - a place she played at often. 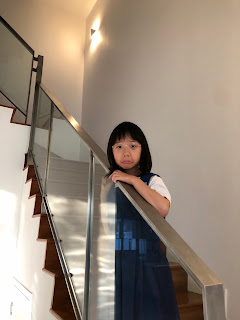 The movers came when she went to school.
After school, I brought her back to the empty home to say her goodbye.